Christmas has come early for a group of isolated and lonely people in the York area, thanks to a pair of National Lottery winners dressed as Santa and his Chief Elf. 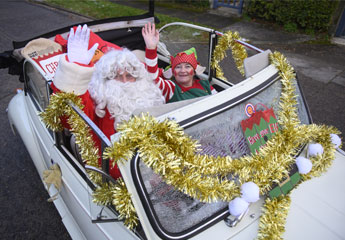 Elaine and Rob Leason, who scooped £1.4MMillion as part of the Tesco Driffield Lotto jackpot-winning syndicate in July 2005, have always loved supporting charities and often dress up to spread some Christmas cheer. The couple, who were unable to give back in person last year because of the pandemic, were delighted to be back out on the streets again in their festive finery.

Elaine and Rob made 10 festive hampers and delivered them to some of the people supported by the National Lottery-funded charity, York Neighbours. The project helps more than 475 vulnerable people across the city, enabling them to live independent lives and reducing their isolation and loneliness. 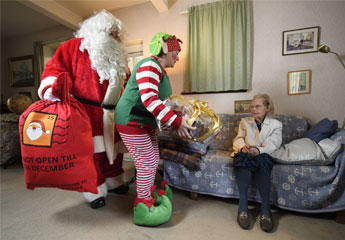 Using a vintage car as a substitute for Santa’s sleigh, Elaine and Rob delivered hampers to a group of people including 103-year-old Eva Sessions. The former dental nurse is no stranger to helping out herself, having set up a dental clinic offering free treatment to the most vulnerable members of her community during the second world war.

Eva, who has been living alone since the death of her second husband, said, “York Neighbours has been a real lifeline for me. Without their support and the regular calls, I would be so lonely.

“I just could not believe it when Santa and his Elf arrived on my road – Christmas has now well and truly started. And they didn’t just come to say hello, they brought me a huge hamper full of so many goodies. I absolutely can’t wait to open it and tuck in – Christmas really will be special for me.”

Elaine said, “The smile on Eva’s face when we handed the hamper over is something we will never forget. Christmas can be a very difficult time for lots of people. We are delighted to be supporting York Neighbours this year, making hampers and bringing early festive joy to those who may not have a Christmas filled with lots of cheer this year.”

Roni Robbins, coordinator at York Neighbours, said, “We cannot thank The National Lottery winners enough for their generosity. It is wonderful to know that many of our beneficiaries will have a more joyful Christmas this year thanks to these kind donations.”